Where I start my day every morning

Yep, I’m paying for yesterday’s adventure! I can barely walk, I’m so sore. After sleeping in, a good breakfast, and another marvelous massage (no chicken fighting this time!), I’m just hanging out. I’ve somehow lost my glasses, so I go to the optician and order some readers. I spend a fair amount of time editing photos from yesterday. Gus wants to go to the Yoga Barn once again (they have a free lecture every evening from 5:30pm – 6:30pm) so I arrange to meet him there. He doesn’t show, but that’s ok, it’s Indonesian yoga, with some english thrown in. It’s easy to follow and it feels really good to stretch.

I get back to the Nest just in time to dress for tonight’s festivities. My kebaya is ready and I am going with Kadek and Ketut and their children to the thousand year old Samuan Tiga Temple for the Full Moon Ceremony Festivities. I tug the corset tight, wrap the s

arong like Mitsuyo taught me, buttoned up the hundred buttons up the front of my jacket, and brought my belt. Oops, belt has no velcro. I Facebook messaged Kadek, can she bring a pin? No problem. I love technology.

I shuffled (no big steps with this narrow skirt) to the top of the ramp where Ketut and family will pick me up. Traffic is bad by the temple, but not impossible. We are directed to a special parking area and pull in. There are hundreds of motorbikes and parking lots full of cars. Everybody’s here! As we get out of the car, I can see what the rest of the crowd is wearing. Kadek, not in her usual t-shirt and leggings, is a Hindu Princess with her white kebaya. Ketut, who just yesterday was hauling himself up the mountain in sweats, was splendid in his white shirt, headband/hat, and sarong. The kids were dressed in mini versions of their parents. I felt like I was among royalty!

The temple in front of us

Kadek retrieved the offering from the trunk, a huge basket full of smaller woven baskets of flowers, food, and shredded pandanus leaves to offer to the gods. She carries it on her head while holding her 5-year old daughter’s hand. We make quite a procession in the parking lot.

We join the throng of people heading into the temple. It’s like Saturday night at the state fair, but better. Everyone is dressed up, ladies in kebayas, men in their white shirts and hats, so many white shirts with bursts of color from the women.

There are bands of gamelan playing, and the temple is decorated with colorful umbrellas, fabric over the statues, and other decorations. We pass an area with over a hundred people praying. That’s where we’re headed.

The crowd surges up a small hill and around the corner. We press toward the gate to the praying area. I’m holding on to Kadek’s kebaya, hoping not to get lost. Ketut and the kids are behind me. When the current group finishes their prayers, the gates open up and we crowd in. Ketut finds a place to sit while Kadek brings the offerings up to the stage. She sits with us and gets some incense and flowers out. Once everyone is settled, a voice over the loudspeaker begins the prayers. I got this! I kneel and do the prayers: no flowers, flowers, flowers, flowers, no flowers. There are many panditas to serve this huge group and ours comes by with the water: sprinkle sprinkle, drink, drink, drink, hair, rice. Even the kids, age 5 and 6, participate. I am the only westerner that I see.

We file out after I get some photos and go up to praying station #2 and do the same praying, water, rice ritual. We take pictures of each other. I admire the decorations and the gods of the temple. I feel so energized! There is a small group of westerners with cobbled-together kebayas. They look uncomfortable. 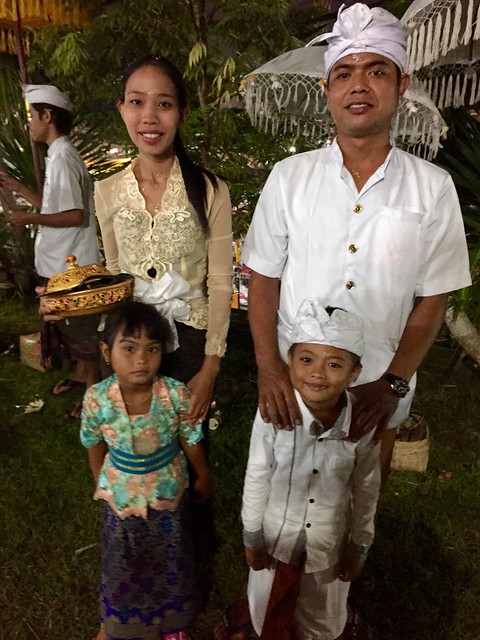 What a beautiful family!

Like the fair, there are all kinds of booths with folks selling food, toys, and all kinds of other things. We go up the hill again to find a huge stage in front of a large area with no chairs. Everybody is just sitting on the floor, sometimes indian-style, some kneeling, waiting for the show to begin. Ketut says wait, it’s a great show. Kadek is getting snacks for the kids and buys me a bag of chips. Yum, Bali barbecue flavor. The show begins, gamelan music, ladies dancing, men dancing, then the Mahabharata again. Dang! Still haven’t read the Cliff

It’s also getting late. I’m pretty tired and making hints about going home. Kadek is on her phone, her daughter fascinated with the play. Ketut says stay, it’s a great show, but their 6 year old son, who has been sick last week, has fallen asleep. Ketut was going to take him home and then come back, but it seemed better to call it a night. I was still pretty tired and somewhat sore from the day before. We file out and back to the car.

Kadek and Ketut were planning to have dinner when they got home and wanted to make sure I wouldn’t starve either, so I left with some kind of puffy chips, an orange, some grapes, and some sweet puffed rice crackers. Even though it’s almost 11pm, it tastes good.

When they drop me off, I shuffle down the ramp to the Nest. I feel like Cinderella after her pumpkin coach disappeared, just regular Julie again. Sigh. I go straight to bed, tired but thankful that I got to be part of the Hindu royal family tonight!