Anna, Ray, Me, and Alan in the breakfast room 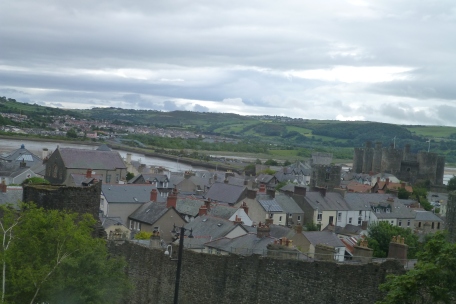 View of Conwy Castle from my bedroom

We’re off to Liverpool today, but since it’s only an hour and a half drive from here and we can’t check in until 2pm, we get to hang out in Conwy for a bit.

The first order of business is breakfast. Alan is there, of course, and his friend Ray. We chat and I enjoy their jocular banter (yes, jocular banter). Ray is President of British International Rescue & Search Dogs and tells us amazing tales of adventure and life-saving. Alan tells stories of his National Champion ski coach days, and before I know it, over an hour is past. Jon, Anna, and Morgan come down and Jon wants to film the guys as part of his documentary. I settle up with Alan and leave them to it. I’ve got a castle to tour!

I can see Castle Conwy from my bedroom window and I would like to learn more about it. Construction began in 1283 as part of King Edward I’s plan of surrounding Wales with “an iron ring of castles” filled with English to subdue the rebellious Welsh population. Beaumaris castle, which we visited yesterday, was the last one built. It was never finished. There are only a few explanatory signs, but I admit that I did get chills standing in the King’s chambers. Even though the place is in ruins, there is still a strong sense of history here.

I hike slowly back up the street to Llys Llwellen, find the kids, load the car, and it’s off to Liverpool (and my last day of driving on the left – hooray!!) Mrs. GPS takes us into town under the Mersey River and I drop luggage and kids at the hostel. We have a nice room (4 lower beds) with a bathroom, and the hostel is centrally located. Leaving the kids to their own devices, I head to the John Lennon International Airport to drop the car off and take the number 86 bus back. I know I’m in the right place when I see the yellow submarine. On the way back to the hostel, I’m checking out things to do. I look up, and there’s Penny Lane. Yep, it’s Liverpool. 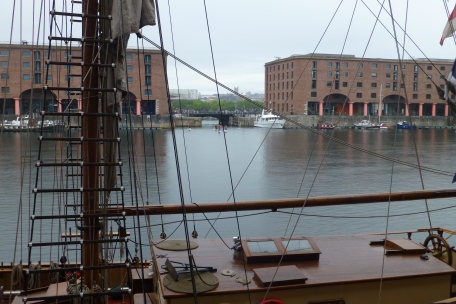 I text Morgan and tell him that I’m not stopping back at the hostel but continuing down to the waterfront to catch the last hour of the Liverpool Museum, then, after that closes, the last hour of the Liverpool Tate Modern, right next door. We decide to meet for a nice dinner. Jon and Anna found some pork chops at the store and will be cooking in the hostel’s kitchen.

Modern art – a Calder mobile, a Duchamp urinal, and tiles on the floor

We make it to the restaurant just in time to get the early-bird menu: 25 pounds for three courses and a half carafe of wine. The food is organic, locally sourced, and there’s not a french fry in sight. Heavenly!

Back at the hostel, we make plans for tomorrow. There is a free 3-hour city tour at 11am, but I’m the only one who is interested in this. I want to take the kids on a Beatle-specific tour, and the hostel recommends the Fab Four Tour – 45pounds for all 4 of us for two hours in a private cab. Can’t beat that! We book that one for 3pm tomorrow, our last full day in Europe.