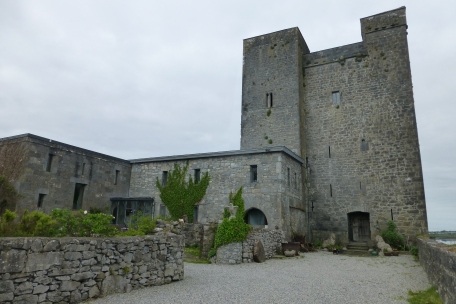 We start the day with a hearty breakfast at Kathryn’s kitchen table. Her freshly homemade scones and jam served with eggs and freshly brewed coffee hit the spot. As we finish packing, Jon takes a few minutes to interview Kathryn for his documentary and then we’re off.

One thing we wanted to see in Ireland were castles, and today’s the day. Kathryn knows Leonie, the owner of Oranmore Castle, and suggests we stop there first. There are a line of 15th century castles up and down the coast, but Leonie’s castle is the only one that’s lived in. Her parents bought the castle in the 1947 and Leonie was raised there. Now she lives with her musician husband and rents the castle out for events and photo shoots in the summer. We know this because when we pulled up (on this holiday Monday) she was putting her sign out saying the castle was closed. However, when she found out we were friends of Kathryn, she welcomed us in for a short look. It’s not every day you meet someone who lives in a castle! 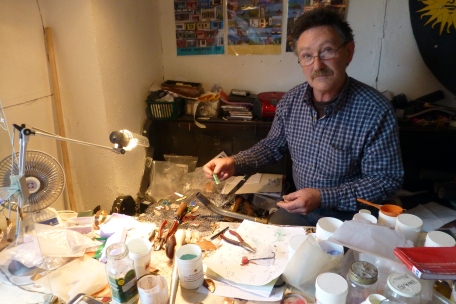 Moving on, we make a quick stop at Dunguaire Castle in Kinvara. It looks like the sister castle to Oranmore, but more commercial. A redeeming factor is the guy upstairs making jewelry from bits of copper and glass crystals. He started making jewelry there in the 1970’s outside on the castle roof. He’s met all kinds of people and his designs are really nice. He showed me how to create some pieces with his blowtorch. I don’t know exactly what the kids did, but I had a great time chatting with this guy!

Back in the Micra, we head south to the Burren. I’m a bit more relaxed about the driving today and only make one mistake pulling into the right lane when it should have been the left. Thank goodness for my navigator! The good news about driving today is that since it’s a holiday, there’s not a lot of traffic. The bad news is that the country roads all seem to have curbs and/or 4 foot high shale walls, often covered with plants. Very nice, but it becomes a problem because in many spots the roads are really only 1 1/2 cars wide, so when another car comes barrelling toward me, I tend to drift left, sometimes scraping the plants and the curb against the side of the car. Morgan says he is terrified (well, I had to provide some thrills since the skydiving was out!) and I tell him not to stick his hands out of the window. And then there are the moving cow road blockages. Yes, it’s fun to drive, I keep telling myself.

Cows in the road!

The Burren is the largest limestone field eroded by glaciers in Europe. This stark area is extraordinary because nestled in between the limestone rocks, you can find sea fossils, Arctic, Mediterranean, and Alpine plants together in this singular place. Add to that some megalithic tombs and ancient ring forts and it is a fascinating place to spend some time. 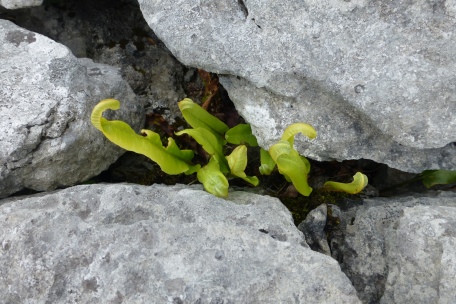 Plants in the crevices

After lunch, we continue on to the famed Cliffs of Moher. Standing 702 feet above the sea and stretching for 5 miles, they are dramatic and awe-inspiring. You might have recognized them as the Cliffs of Insanity from The Princess Bride or the cave of the horcrux in Harry Potter and the Half Blood Prince. It’s a shame we only have a couple of hours here – we want to walk all the way from one end to the other.

But we want to get to Dingle before dark, so we pack it back in and head south, arriving just in time for a quick bite at the gyro place for dinner. Beautiful! 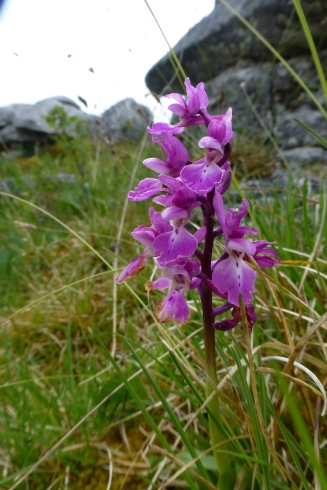 Flowers in the crevices

In the ring fort