On the Left to Galway 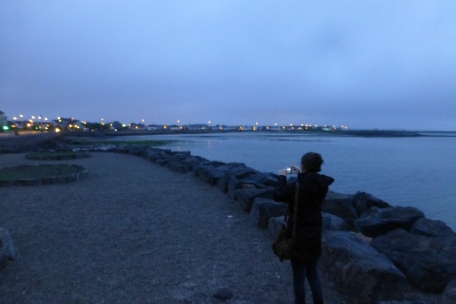 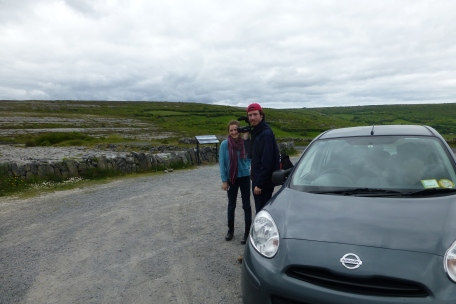 We are up and at’em early – we have to take the bus to the airport, grab a rental car, and head out to Galway and a skydiving adventure for Morgan and me. It was a rough night. Even though we were on the third floor, some really happy Saturday night partiers were celebrating life extremely loudly outside our window for what seemed like all night. My earplugs helped a bit, but they don’t block out everything. I should have seen this as a warning for the day ahead.

First, at the bus stop (once we found it) we were accosted by a young Irish drunkard who thought it was funny to take Jon’s hat. I asked him nicely to give it back and move along, which he did not like, but he complied. 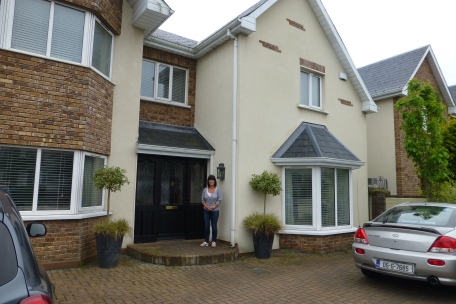 Upon arrival at the airport, I get the car rental paperwork out of the way and go to the car, where there is no key. Back to the counter I go. We are driving the smallest 4-door car on the planet, appropriately called the Micra. I have to remove the cargo cover to fit all of the bags in. Jon and Anna are wedged in the back, Morgan is my navigator, but he’s sitting in the driver’s seat! Without the wheel? No, in Ireland and England they drive on the opposite side of the road, therefore everything is opposite. 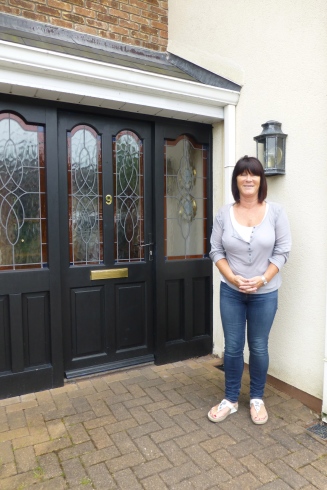 Normally I would consider myself a good driver. I was a little nervous to drive on the other side of the road, but not a lot. I’ve driven all over the place, including Spain, France, and downtown Washington DC. How hard can it be to drive the bucolic country roads in Ireland? Plenty hard, it seems. First, the car is a stick shift. Yes, I drive stick, but I shift with my right hand, not my left. My left hand does not have the sensitivity to find every gear, so that’s a challenge. I’m used to looking up to the right for the rearview mirror, but now it’s up and on the left. I’m used to looking over my right shoulder when backing up, now it’s on my left as well. I drive slowly and whisper to myself to stay left at every junction. Even the roundabouts (of which there are many) go left instead of right. Stress level is high. Thank goodness it’s Sunday morning and the traffic is light. 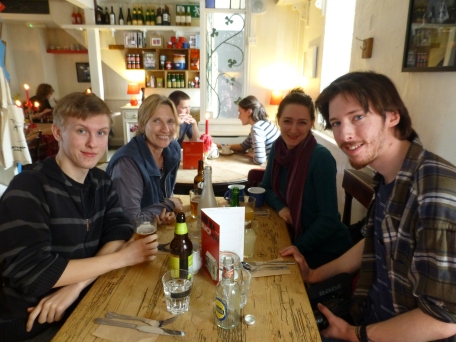 I don’t have a great map, so we fire up the GPS, which has served me well in every other country in Europe. However, it is taking us off the freeway that we’re supposed to be on. This is a steep learning curve for my inexperienced navigator and left-hand-side driver. Finally, we end up in the middle of nowhere. The GPS wants us to turn into an empty field. I scrape the sidewalls of the passenger side tires on the curb. This makes an ugly sound, but after a cursory look, nothing seems busted. We get back on the wrong freeway and continue until we find a toll booth. Thankfully, the toll-taker has family in Galway and gives us some good directions. We are on the right way in no time. I later found out that the freeway was newer than my GPS’s card. That’s why it couldn’t find it. 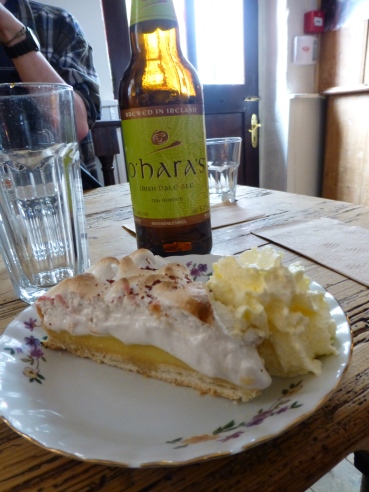 However, we are running about an hour late. In this hour, I was going to drop Jon and Anna at our host’s home just outside of Galway and then zip out to the airport for our skydive. I have Morgan text Kathryn, our host, but get no reply. I have Morgan call the skydive people and can’t get through. Well, fortunately the airport is right off the freeway and we cruise in about half an hour before our skydive appointment. However, no one is there. No Skydive Ireland, no sign, heck, the airport isn’t even open. Skydive Ireland is not answering my call. Maybe it’s my British SIM card from home. I find a guy coming out of the flying club and ask to use his phone. Same story. No answer. Must be too cloudy to skydive. After the stress of driving here, I am equally disappointed and relieved. Guess it’s just not meant to be.

Which is good, because now we can go into Galway. I reach Kathryn and she’s ready for us. NOW the GPS is working and we find her house with no trouble.

Kathryn is another great example of an Airbnb.com win. Her house is located in a neighborhood about 10 minutes drive from Galway town along the beach. If we had the time, we could walk along the promenade. We took all three of her upstairs bedrooms (the boys got to have a separate room each) and after introductions and instructions, along with a cup of tea, we were heading into town. Today is Sunday, the middle of a three-day holiday weekend, and the town is bustling. Kathryn recommended a fabulous restaurant for lunch and it did not disappoint. They even had yummy homemade gluten-free desserts. 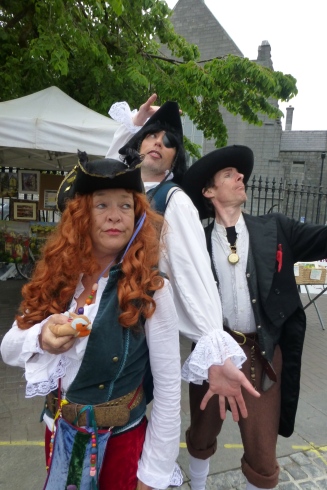 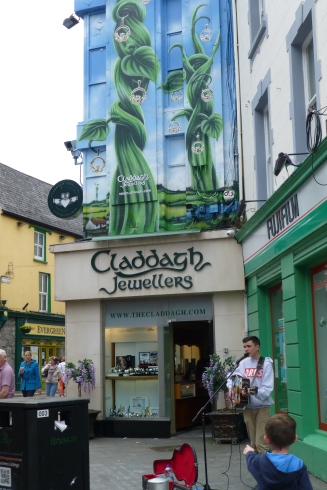 We walked up the main street toward the market behind the church. On the way, a very tall man with a very fake beard came up to us and asked, “Have you seen the whale?” We said no. He asked from where we be. We be from America, we say. The Americays! Oh, it’s too long a journey for an old man who’s looking for a whale. We wished each other good luck and carried on. I wish I had taken his picture. We did meet some Dread Pirates closer to the market, though, who were happy to pose. Morgan went into the pub just to use the bathroom and chatted with a fellow at the urinal, garnering an invitation to share a pint. In the street, a guy is playing “Wonderwall” on his guitar, an Irish band of kids age 6-11 serenade the crowd with traditional fiddle and drum, a guy in a box with a stuffed dog on top barks at people who leave him some coins, scary fun for the children. So many families, so few tourists, it’s perfect. We walk through the town, down the hill to another church, then back around to our car. 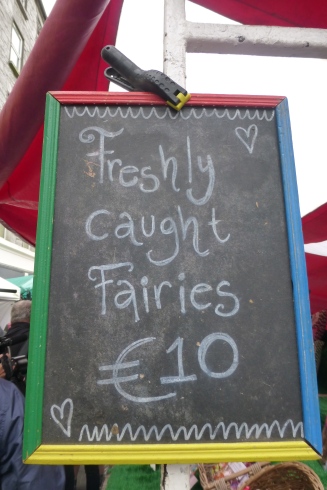 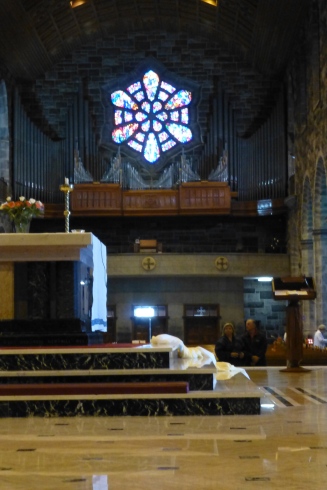 Jon’s ready to go back and do some editing, so we drop him off at the room. Morgan, Anna, and I drive back into town for some music and dinner. As we head to the pub, we notice they’re closing off the street for a block. It’s the silent disco! After dinner, we poke our nose in a pub looking for some non-silent music, but found nothing but strange looks. It’s past 9pm, and the silent disco is just getting going. There are two DJ’s, strobe lights and smoke, and everybody has headphones on and are groovin to the tunes. The headphones cost 10euros and there’s a line down the street to buy them. Last year, 2000 headphones were sold and the street was packed. Too bad we can’t stay. 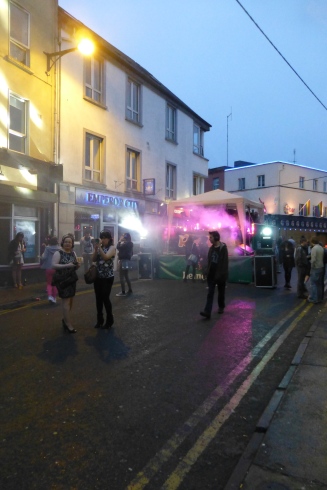 One more thing before we end the day. Anna wants to “see the sun go down on Galway Bay,” (apparently, it’s a song) and so we drive down the waterfront to find the perfect place. Unfortunately, it is cloudy and we can only imagine the sun going down on Galway Bay, but that seems to be enough.

Tomorrow is a long drive to Dingle through the Burren with a stop at the Cliffs of Moher. 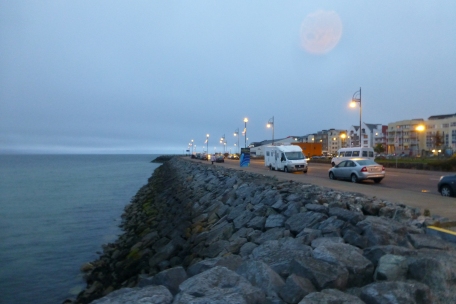 The moon over Galway Bay