Up the mountain from the valley

We’re up at 5am, having a bit of breakfast made by Amedeo at 530, and out of the house a bit after 6am. It’s light out, and we’re headed northeast toward the Dolomiti. It’s unclear what the weather will be, but the passes are open and the clouds are high. 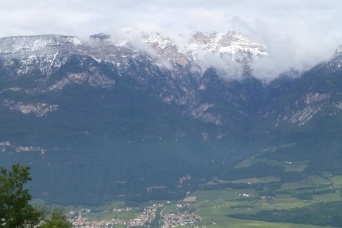 Getting higher and higher

After driving for about an hour, we head up a huge valley, snow-capped mountains on either side. It’s breathtaking, but Amedeo says we ain’t seen nothing yet! We turn right and head right up the side of one of the mountains, stopping for a quick coffee and strudel. This area used to belong to Austria and you can see it in the churches and houses we pass, as well as the food.

Over the top of the mountain and we continue through Alpine-like verdant green valleys surrounded by the dramatic rock cliffs toward the pass. We take the turn toward the pass and head up a series of s-curves. Before we know it, we’re surrounded by snow-covered trees. We stop at a pristine mountain lake. Since it’s between seasons (and just after a late-in-the-season snow) we have the place to ourselves. It’s beautiful.

Spring in the Dolomiti

We climb higher and higher, at every turn we see a different view of the tops of the various mountain groups. Marmolada, Cristallo, Sella, they weave in and out of the snow-laden clouds. Amedeo is a bit disappointed that it’s so cloudy – there are amazing views on a sunny day – but we are thrilled to be in the clean pine-scented air, chasing the ghosts of these stark mountain peaks. We reach the first pass and walk down to the little store/restaurant/gift shop/base of cable car that takes you to the top. It’s cold, though, so we walk back up the slushy street and move on. 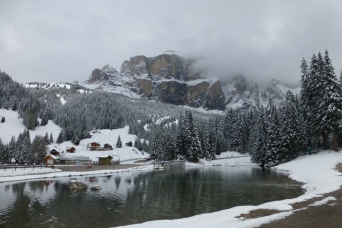 Heading down, and then up again, we reach the second pass and it’s snowing. The temperature outside is minus 2 celsius, or 28 degrees fahrenheit. Leaning against the store/restaurant/gift shop are several bicycles, their riders huddling inside with a warm drink. Bravo to them for making it to the top – it’s all downhill for them now, as it is for us.

More views and more snow accompany the stories that Amedeo is sharing with us about his climbing experiences and some funny stories about how the Italian and Austrian soldiers interacted with each other here on the front line during World War II. Next stop is Cortina, home of the 1956 Winter Olympics, and playground of the rich and famous. Today, though, the rich and famous are absent and much of the town is closed in this off-season. Riders from the Giro d’Italia (the Italian Tour de France) are preparing to start a stage in the race, though, and we find one restaurant open that will serve us lunch. On the way back from the bathroom, I strike up a conversation with the cooks in the kitchen – two from Poland, one from Albania, and one from Italy! An international staff.

Well fed and ready to go, we dodge the racers and drive down the valley, heading to Venice. On the way, we stop to see the Vajont Dam, one of the tallest dams in the world. In October, 1963, a huge landslide from the adjacent mountain tumbled into the dam, creating a 650 foot wave overflowing the dam and destroying everything in the valley below, including several villages and causing 2000 deaths. The memorials to the drowned were moving and it was interesting to hear about the disaster from Amedeo, a civil engineer.

Finally, our last leg through the vineyards gets us to the train station going into Venice. This is the cheapest place to park, since there are no cars allowed in the city. From here, we take a bus across the causeway and are let out near the Venice train statin. Trying to decipher our way through the winding streets, eventually we find the square behind our apartment and meet our host. He leads us down the alley into a courtyard, up one flight of stairs to the outside door, then up three more floors to our apartment. We take a moment to get the intro information of the place, then drop our bags and find some dinner. 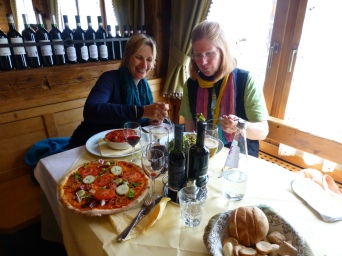 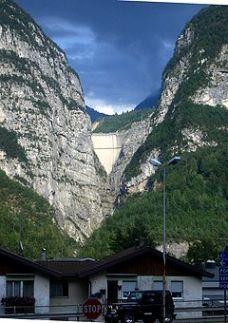 Vajont dam from the valley