The day started at 5:39am with two very drunk Italians singing “Back to Black” along with Amy Winehouse. Loud. Right in our window. That was what got us out of bed, but it wasn't our wake up call. Our Trastevere apartment on the “left bank” of Rome was three doors down from a four story student dorm. It was Saturday night. Smokers, laughers, drivers, singers, we heard them all. 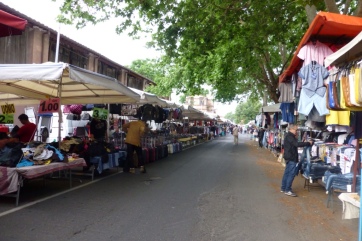 Well, we were planning to go to the flea market before mass at St. Peter's anyway, so we had some coffee, tea, and cookies, and went up to find the bus. The Trastevere flea market is the biggest in Rome, going on and on with almost every type of product you can imagine. There are tables and tables of piled clothes, shoes, and handbags at a euro a piece. (Reminded me of 'as is' in Portland!) One thing I like to do when traveling is bring clothes from home that I don't wear often, wear them a bit, then leave them and instead find something new to wear. Clothes, bags, shoes, and jewelry are the best souvenirs: useful, easy to pack, and often light in weight. We found some of each of the above – my favorite find was summer boots. Turns out women in Italy wear light boots in the summer. The boots go well with my Italian handbag.

So many people heading toward St. Peter's

At the other end of the market, we have a quick panini and look for a bus to take us back to the apartment so we can drop off our purchases and get to mass on time. When we were in St. Peter's on Friday, we noticed that people were joining the small group of worshippers in front of the altar at all times, so we weren't too worried about getting there right on time. Back to the apartment, we find the bus that will take us to church.

It's the Pope on the front stairs of the Cathedral

However, when we reached Vatican City, we noticed something strange. The streets were thronged with people, all heading toward the cathedral. In fact, the entire street to St. Peter's was packed with bodies. Along the sides of the road, huge, 20 foot tall tv screens were showing clergy speaking, then… was it… the Pope? OMG! Instead of the small service under the altar, we had stumbled on a mass given by THE NEW POPE!

Lining up for communion

My heart started beating faster as we wound our way toward the front of the church. The choir was singing, clergy alternated with the Pope as the service progressed. When we got closer, we noticed that we could not get farther than the rows of chairs that we had noticed filling the square two days before. These were the paid seats. As it was a sunny day, Susie went to find some shade. But me, I found a place about 3 people from the front of the free zone. The choir was heavenly – I mean, would it not be a choir of the highest quality that sings in the Pope's Mass? Some short Italians pushed through to the front of the barricade. They stayed for just a minute and left, leaving a hole for me to squeeze into. Now I was just one person away from the front of the free zone. A long way away from the Pope, he was just a dot in the distance, but I could see the big screen and hear the choir clearly in the speakers above my head. Now there are some Italian nuns next to me, singing along with the choir. I am covered in goosebumps of rapture. 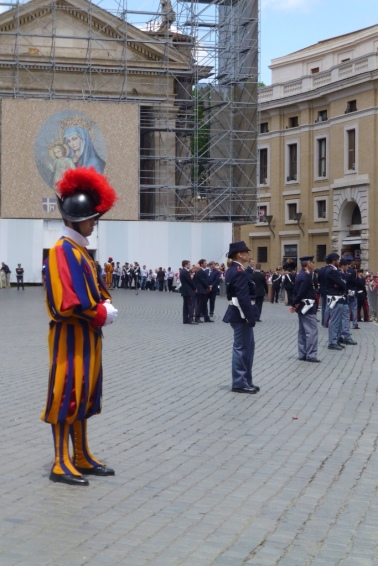 I also finally decided why I had been learning Italian. It was to understand at least some of the words when Il Papa started speaking. The crowd around me was focused clearly on every word he was saying. After the missive, the priests of the world came to our barricade and offered communion. People lined up to receive the blessed wafers. I got jostled around a bit, but maintained my position. As the service was finishing, the crowd started buzzing with excitement. Now what?

The Swiss Guards of the Vatican lined the open space between the free zone and the paid seats. For every one of those, there were five other security suits. Something big was going to happen. Then, the huge screens showed the Pope getting into a car and driving through the crowd. He's in the PopeMobile and heading our way! Hands holding cameras sprouted up from the crowd like blossoms. Eventually, he got to our zone, the free seats, and drove, I swear, not 20 feet away from where I was standing. It was hard to decide whether to stare with awe or record the moment in photos. I chose the photos and was handsomely rewarded.

The crowd is alive

After he passed by, some of the crowd moved on and I moved forward to the front of the rail. The line of security was still in place, and one guy, when asked if Il Papa was coming back this way, said he didn't know. I hung out and watched the faces of the people around me as we all stared at the screen to follow the PopeMobile's journey through the square and down the street. The buzz returned when the car turned around and all of us who were left were granted with an unobstructed view of the most powerful religious leader in the world, blessing us. Wow.

As the crowd dispersed, Susie and I found each other and headed out. Since the last thing the Pope said was, “Happy Holiday (Pentecost), have a nice Sunday, and have A Good Lunch,” we were going to comply. We took a bus to the Piazza del Popolo at the other end of the Via Corso, and walked down it until we found a good restaurant and had indeed a good lunch. We still could not believe that we just had Mass with the Pope. Wow. 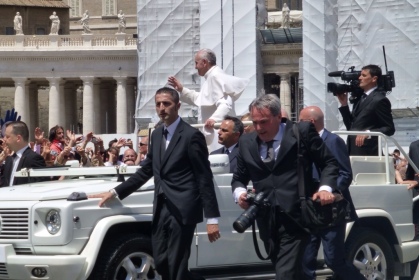 No plexiglass on this PopeMobile

Afterwards, we visited the Spanish Steps, saw some ancient and beautiful mosaics and wall frescos at the National Museum, and then bussed it back to our apartment (still without internet) to pack for departure tomorrow.

From an ancient Roman home 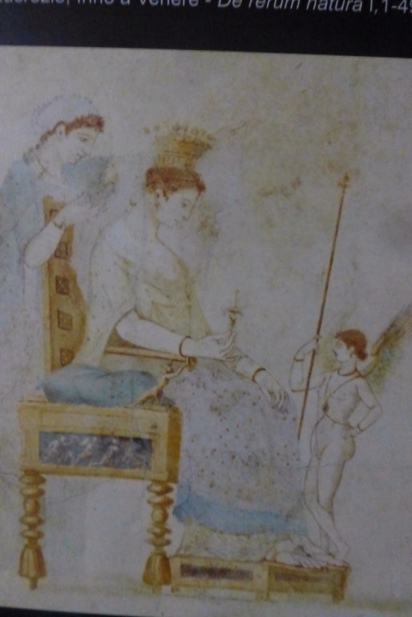