The End of the Earth

For many, Santiago is not the end of the Camino de Santiago de Compostela. No, it is possible for a pilgrim to walk from the Pyrenees (as we mostly did) all the way to the Atlantic Ocean. When I made our air reservations, I didn’t really take this stage of the journey into consideration – in fact, we had planned to just walk to Santiago on Monday and then head out the next day.

However, a couple of weeks ago, in Acebo (Reunion II) we decided that, although we didn’t have the extra four days to walk that far, we could get to Santiago a day earlier, that is, on Sunday. A good idea on several levels, it gave us a better chance to see the botafumiero, which only swings on certain Holy days (remember Sunday was the feast of St. John the Baptist?) It also gave us time to take the bus out to Finisterre – the westernmost point in Spain and the place where many pilgrims feel is the true end of the Camino – on Monday, therefore completing the entire Camino one way or another. Yesterday, thanks to the Parador concierge, we don’t have to take the three hour bus ride. We are renting a car this morning, I’m behind the wheel driving to the coast, and as a bonus, we also can visit Muxia on the way back.

Or at least we thought we were driving to the coast. Faulty directions led us north out of town, so we just changed our circle trip to go from Muxia to Finisterre instead of vice versa. It took us getting a little lost to figure it out, but eventually, after driving through some perfectly charming towns that for sure no other pilgrim has visited, we arrived in Muxia.

It was foggy here at the coast and quite cool. This is where the movie The Way ended their journey. There’s a cute seaside town, but the attraction is down the road a few kilometers at the Sanctuary of the Virgin of the Boat, a Christian church located on the site of a Celtic sacred site. It’s rather extraordinary to look west and see the ocean instead of more Camino.

We find a restaurant for lunch and share all of the local specialties. During lunch, a young man who looked familar came to stare at us as we were eating. Turns out, it was Morgan, who finished his walking here last night and getting ready to take the bus back to Santiago. He grudgingly let me hug him (haven’t seen him for weeks!) and turned down our offer to haul his backpack in our trunk so he could take the bus without encumbrance. He sees the bus come and runs to join his friends for the ride to Santiago.

Back in our car – a Spanish SEAT (not the whole car, ha ha) – we head down the Costa da Morte, literally, “Coast of Death,” ostensibly named for the many shipwrecks along the rocky shore. However, now that I’ve gotten a feel of the car and have no trouble passing the slower drivers, some of the ladies in the back seat (you know who you are!) are wondering if the name applies to more than shipwrecks.

As we get closer to Finisterre we see yellow arrows and Way markers along the road, along with a few pilgrims. The beaches we pass approaching the town are long and wide and beautiful. There must have been an awesome party there Saturday night. We do a drive-by of the town, passing by several albergues and a small fishing port, but our final destination is the lighthouse at the end of the peninsula, another few kilometers out. As we drive past pilgrims walking, we are all thankful that we’re all on our SEAT (ha ha). 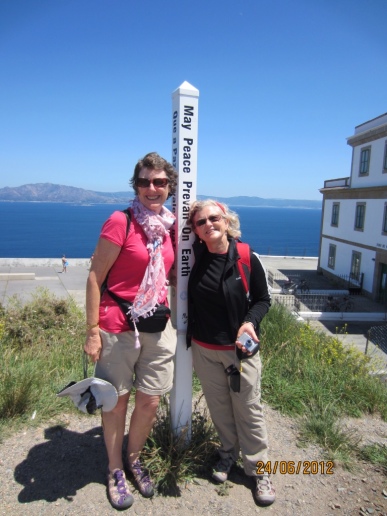 Finisterre – the end of the earth, land’s end. Muxia is a stop at the ocean, but Finisterre is the westernmost point in Spain and the popular, spectacular finish of the Camino. Once you get past the Camino souvenir stands, there’s the lighthouse, and beyond the lighthouse, the point. This is the spot where, as a final gesture of letting go of your old self, you burn your clothes (and hopefully put new ones on afterward that you bought in Santiago). I brought my sock liners to burn; they helped me, they hurt me, then I didn’t need them.

Unfortunately, and I can only guess the reason, we are not allowed to burn anything out there anymore. However, there is a cross where people have left various articles of clothing, and that will have to suffice. I tie my liners on the cross and say a prayer – for the woman who bought them is not the same woman who is leaving them. Mary leaves her dad’s hat that she’s been wearing all Camino. We have a bit of time to sit and reflect, but soon it’s time to head back to Santiago.

It’s a beautiful drive along the rocky coast and up the river valley to the freeway. Our goal was to be back to the Parador at 6pm, and we’re just about to make it. Had to do a quick detour to get gas for the car (didn’t think the car could u-turn so tight in traffic, did you, ladies?) and were back just a little late. Before we called it a day, I requested the gang get their packs and we take pics of us at the cathedral, since I wasn’t in a picture-taking mood upon arrival (thanks, guys!), and we went back to pack for our departure tomorrow.

Morgan’s stuff was in the room and he was out spending his last evening with friends. We are dog-tired from travel, walking, staying up late, getting up early, and I really just want to go to bed. However, Mary wanted to have one final night in Santiago (“like a hooker, walking the streets”) and I had to agree that this was the best idea. She took us to a tapas bar where we said goodbye to some folks we knew, met some new ones, and had way too many chupitos (ooops, that was just me). Not sure exactly what time we all got back and was glad I set the alarm ahead of time for 6am. 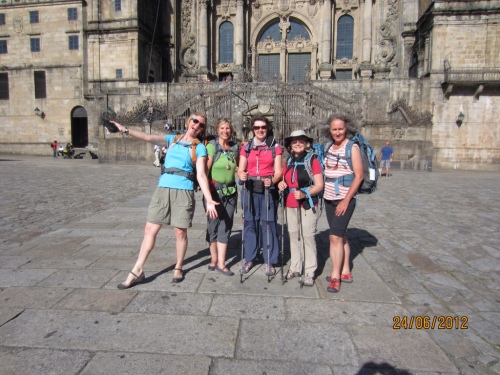 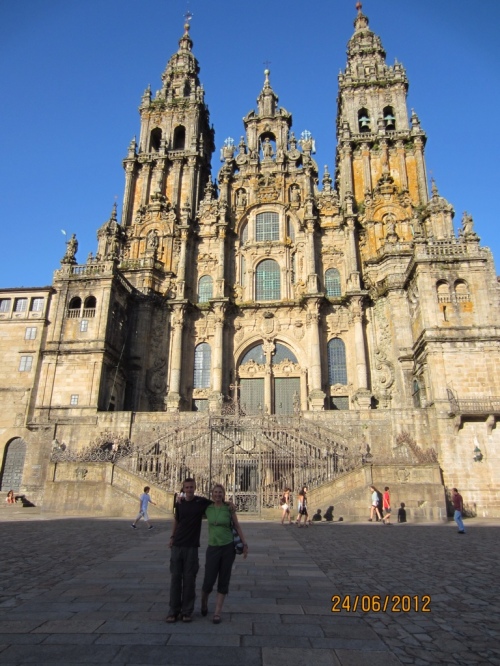