Even though I was up past midnight last night, I'm awake at 7am, hopping out of bed and heading for the cathedral, which I can see in the haze from my bedroom window. Hardly anybody's there – it's so peaceful. I walk the empty streets in search of a bar open early on this Sunday morning for coffee. Of course, it's right across from the pilgrim office. Coffee…

Before Mass today, I'm supposed to meet Amedeo for brunch at the Parador, my second home. Not only do they have a great patio for drinking champagne, they have amazing bathrooms with the sweetest lilac soap. OK, it's a beautiful building, opulently furnished, historical and all that, but the bathrooms!

I'm dressed in my Sunday best, (oh wait, it's the same blouse I've been going to dinner in and sleeping in for the last 32 days – forgive me, Santiago!) and glad of it because this is some fancy breakfast. Kiwi juice, caviar, champagne, the best hams and cheeses, chocolate – well, you get the idea. I feel like Cinderella at the ball after all those breakfasts of just toast and coffee. After breakfast, we wander through the courtyards meant only for guests, admiring the medieval fountains and gardens.

Since we're meeting the gang in front of the cathedral at 11:30am, and it's only 11am, there's time to do a little research for the next couple of days. The tourist office is open and I find we can take a 32 minute train ride to A Coruna, from where we are flying to Madrid in two days. That's good news. But for tomorrow, M&S&L&K and I want to go to Finisterre and Muxia. There are tours available (40euros each), but they are inconvenient. Taxis are expensive (same as tour – but need two taxis and we want to be together). The bus is slow (3 hours to go 90km?). Not sure how we're going to do this yet. In the meantime, I get a text from Lyn at 11:20am saying they're going in, it's getting crowded.

We hurry over to the cathedral to find Susie waiting for us and no pews available. Amedeo says we need to sit in the transept for the best view of the botafumiero, the huge incense burner that they might swing this morning. We find some spots on the stone steps behind the pews. It seems that every pilgrim in the world is here. It's not so bad, though, we're on the 2nd step, so we're a bit above the crowd and can see the people at the altar and hear everything just fine.

The Mass begins in Spanish. We stand, we sit, we sing, we pray. The priest talks about where the pilgrims are from that received their Compostelas yesterday. The music and prayer that follows echoes throughout the cathedral. When I close my eyes, the experience permeates every cell in my body. I hear my friend Father Augustine up there, dressed in white, offering a prayer in English. Then, a group of about eight guys dressed in monk robes come to the place before the altar. It's time for the Botafumiero!

The Botafumiero is one of the largest incense burners in the world, weighing in at 176 pounds and is over five feet tall. They load it with about 90 pounds of charcoal and incense and light it up. Smoke emanates from this huge burner as the tirabolieros grab their ropes attached to the pulley mechanism. With a huge heave-ho, the burner rises off it's platform on the floor of the cathedral. A couple of monks grab the thing and give it a push toward us at the end of the transept. Each time the eight pull their ropes, canister swings higher and higher until it's almost touching the ceiling. The clouds of smoking pouring from it are considered a form of prayer. Back in the 11th century when they first started this, it was not only prayer, but served to mask the odors of the unwashed pilgrims and was also believed to prevent the spread of the plague.

Here's a clip from YouTube (not mine) that was taken just a little closer to the altar than where we were sitting. I have a video, but need to post it somewhere, then link and don't have the space in my brain to do that right now. Until then, check this out: http://www.youtube.com/watch?v=ml7_s9qgzXw&feature=youtube_gdata_player or Google Santiago de Compostela botafumiero to see it in action and hear the song that goes with it. 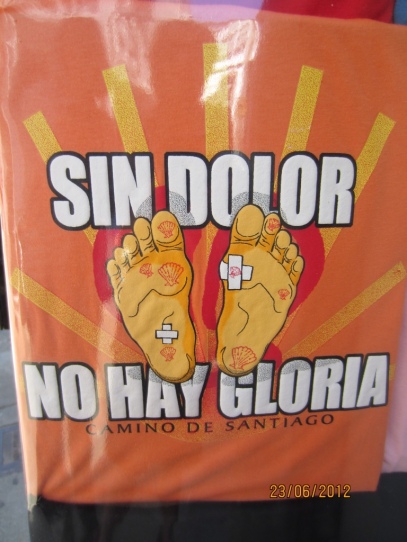 After the Mass, I pop into a side chapel to find a group of young college-age men on their knees in the pews in front of me praying along with a Mass in English. I sit here for a while, listening, absorbing the ceremony in my own tongue for about ten minutes. However, I have friends waiting for me to go to lunch, so I leave to meet Mary in the square.

I tell her about my research on travel to the coast and she suggests that we go ask the concierge at the Parador. What a great idea! We head over to my second home and the concierge suggests that we just rent a car for 80euros for the day. When I suggested this to the gang earlier, they said they were afraid that if I drove, I would get less out of the experience. Well, those of you who know me know that I love to drive (and have been missing my MINI at home), so I was thrilled that this was not only the most fun (for me, at least and hopefully for all) option, but the cheapest, quickest, and most convenient. The concierge said that he could have the car delivered to the Parador in 20 minutes – were we ready? Nope, we said, but we'd love to take him up on it tomorrow. Fine, he said, come around 10am. Note to Mary: seriously, you would make a great concierge – second career at the Heathman, baby!

We text L&K with our find and somehow they find us in the street as they are beginning their lunch of white wine, salad, and razor clams (the official meal of Santiago!) and join them for a bit. We agree to meet at the Parador at 9:30am tomorrow morning. Mary and I then walk down to the train station (meeting Ray from Portland along the way – bringing a picnic of wine and cheese to his sweetie in their hotel room) and buy our tickets to A Coruna. We stop for coffee on the way back because we can and find the shortest route from the train to Roots and Boots.

Back at R&B, both Mary and I are ready for a nap, but there are more friends who want to walk around town because it's their last day there. We stroll the city buying souvenirs, looking at each other's pictures, having Sangria, almost losing my wallet (!) but didn't, visiting the cathedral again, walking through the park.

Eventually, it's back to Roots and Boots, which has a great back yard. Susie's there – I haven't really had a chance to chat with her alone in quite a while – and over a bottle of wine we catch up. Mary's gone off with Silvana for their last night to party together. It's quiet in the back yard; yesterday the college kids were playing drinking games, but today it's football playoffs and everybody's inside watching the game on the big tv in the common room next to our bedroom. I say a final goodnight to the football watchers, then Susie and I try to get some sleep. The room next door gets noisier as Italy scores and to compensate I read aloud to Susie from the romance novel on my iPad and we fall asleep with good dreams to come as the match ends next door.

Tomorrow we go to the end of the world.