Dear Readers, As many of you know by now, I’m home safe and sound, although not exactly the same, from the Camino. The last days on the trail, the triumphant arrival in Santiago, and the celebratory days following did not create a lot of time for writing and posting. However, if you will accept my apologies for the delay, I will continue writing as if I am still in Spain, because there is still so much to say and so much to show you. So, let’s carry on… 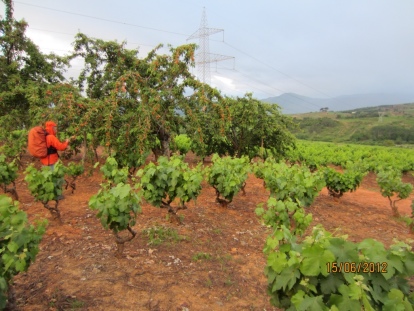 It begins to rain just steps from the albergue this morning at 6:30am. We stop and put on our rain jackets and cover our packs. We have a lovely walk through the vineyard-covered hills and it feels like the wine country of Oregon, drizzly weather included. I didn’t have my usual pre-departure fruit this morning, but no worries, the Camino provides with trees dripping with sweet red/yellow cherries, enough for everybody. Many of the stores along the way sell cherries, but I feel more like a pilgrim scavenging from the trees on the trail. If you wanted something more, you could stop at the Coke machine an enterprising family placed at the end of their driveway.

After a couple of hours, we reach Villafranca de Bierzo, our breakfast stop. This gorgeous stone town with no less than eight churches and convents, was developed along the Camino in the 11th century. The first church we reach is the Church of Santiago (of course) where the Puerta de Perdon (Door of Forgiveness) is located. We are a day’s walk from what some say is the most steepest, most arduous climb over the last high point on our journey. Back in the day, this was as far as some pilgrims could go, so they received absolution from their sins here the same as they would in Santiago. I touch it just to be safe and sit in the doorway for a bit to just absorb the feeling of peace on this rainy day. 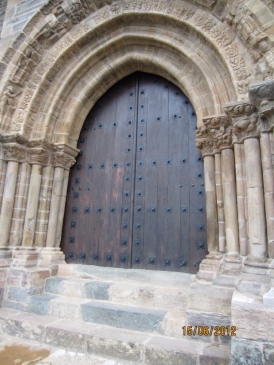 After breakfast in the main square, we move on, not exactly sure where we will stop. My goal is, after yesterday’s death march, to stop early, get some writing and resting done, and get to bed early in anticipation of the big climb tomorrow. Between some towns, there are alternative routes you can take; the often shorter one that follows the highway, or the more scenic one that parallels the road. I plan to take the scenic route, even if my guidebook says it’s an hour longer and more hilly, because I really don’t like walking on the highway. However, somehow as we’re exiting the town following the pilgrims ahead of us, we miss the turn. Oh well, it’s not a bad day for an easier walk, even though my heart races a bit each time a car speeds past.

It’s still raining and when we reach the next town, I want a cup of tea. In the bar, we meet three young American college-age girls from LA walking the Camino. They tell me that I’m brave to walk alone. I told them I didn’t start that way, and sure enough, like many other people I talk to, they know my story. It’s one of the Camino Legends – The Boy Who Fell Off the Pyrenees and Broke His Leg and Had to Go Home. I’m actually only one of the supporting characters (The Woman Who Left Her Friends?), but I’m a little proud to be part of the Legend. It’s right up there with The Man Who Had a Heart Attack and Died on the Pyrenees When It Was Very Cold and The Man Who Fell Out of Bed and Had to Go to The Hospital and Ended Up Dying There. These are the most dramatic; there are others less fatal that I’ll share with you when I have more time. 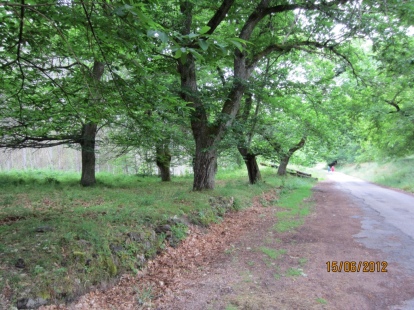 We reach Vega de Valcarce (Vega means “fertile plain, Valcarce is the name of the river we’ve been following) at about 2pm and I’m beat. Up the hill is the municipal albergue (which is, by the way, pronounced “al – bear – gay” with the accent on the bear, and don’t forget to roll your rrrr’s) and as far as I’m concerned, it could be the Hole of Hell and I wouldn’t care, cause I know I’m going to sleep well tonight.

Today, however, after this “shorter” day of 26km, I can’t stay awake and fall into a deep napping state after the laundry is done. This is the first time I’ve napped during my entire Camino (so many other members of the 5AM Club do so) and I wake up feeling good and search the town for wi-fi. Instead I find Mary Ellen from New Orleans and we have a great chat before dinner.

After dinner I find a bottle of water for my Platypus (if I can’t buy water, I just use the tap water at the albergue, which has not hurt me yet, but I prefer to buy a 2 liter bottle) and an orange for breakfast. In bed at 9pm and despite my nap, I’m out before 10pm.

There’s a mountain to climb tomorrow. 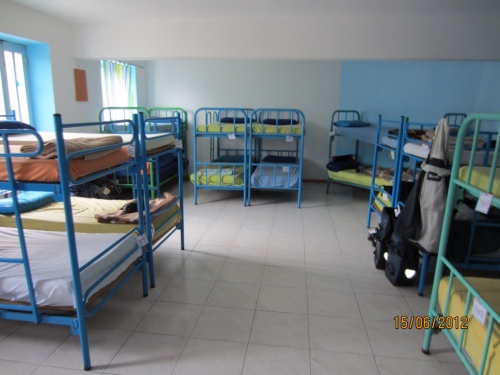