Walking with the Bulls

It’s the meseta and we’re walking early. I have a new habit to buy an orange to eat instead of an apple because they are soooo much better and from not far away. It takes me a minute longer because I can’t eat and walk, but it’s worth it. 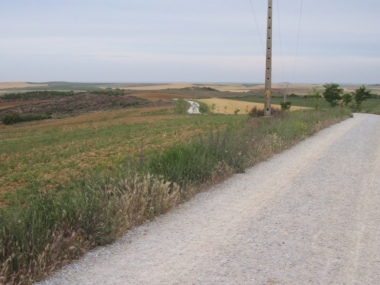 On the side of the road, we find a small labyrinth made of rocks next to a stream. We take turns walking it, and our friend Manolo from Madrid does the same. The village just past it, like many villages, has houses made of straw and clay. Not too many folks up at this hour, though.

When we stop for breakfast, we see Andy from Portland and his walking partner, Jeffrey from Arkansas who works in Russia. Andy’s having trouble with his foot and might fast forward to Leon to buy new shoes.

We head on to the next halfway large town, Sahagun. There are strange railings set up along the street. I’m stuck behind some when I see my friends from Australia, Lyne and Cathy (names probably mispelled – sorry!) We last saw them when we taxied into Burgos together last week. Seeing them is like greeting long-lost family. We find out that the railings along the street are for the weekend festival that involves the running of the bulls tonight. It’s only 11am and I want to get some more kilometers under my belt, as do Uli, Lyne, and Cathy, so we make a plan to walk to the next town (13km), check in, hang out there for a bit, then taxi back to Sahagun to see the bulls.

Uli needs to stop at the farmacia to get a knee brace, and I need some more Compeed for my little toes that still kind of hurt at the end of the day. There’s a market in town and we wish we could buy some of the great local treats, but who wants to carry even one ounce more?

It’s a long walk along the road, across the road, and off into the wilderness again. The wheat fields are in various stages of maturity, dark green, a shining lighter green, luminescent yellow. We had two choices leaving Sahagun: along the highway or through the countryside, about 2km (half an hour walking) longer. We choose the countryside, but it seems especially long this afternoon. Uli’s foot is hurting and she falls behind. I’m on a roll and walk ahead, passing a pretty oasis picnic area and an abandoned albergue, complete with empty pool.

Finally, we reach Calzadilla de los Hermanos and check in to the first private albergue we see. It’s 15euros (kind of expensive, the municipal or church-run albergues are 5-7), but we get a room for 4 with all 4 beds on the floor, our own bathroom across the hall (cause no one else is on our floor), a charger next to every bed, a lock on the door, and a fluffy, white, big towel. I’ve told you before how wonderful a towel is, and that alone is worth the extra euros. Plus, this place has no curfew. Many of the municipal albergues lock their doors at 10pm, and we’re just not sure how late we’re going to party with the bulls this evening.

After a all-the-hot-water-in-the-world shower, a little internet, and a glass of wine, Lyne and Cathy are ready to go to the bulls. Uli does not have the energy, so she stays behind. The albergue owner calls a taxi and we’re heading back to Sahagun.

Things are really starting to heat up here. Across the street is a group of girls taking each other’s pictures, all wearing red shirts. Another group of young men in the street with a band have shirts of green. We ask the guy in the store what’s going on. He says they are the “brotherhoods” of the town, a group of folks all dressed alike, each with their own band. Some will run with the bulls, but most will not. He did say that Lyne, Cathy, and I could be a sisterhood, and parade with the rest, but we declined.

We found the main square and ordered some tapas. The nice Irish boy, Dylan, came over to chat. Then we heard the music. Each brotherhood and gathered and was parading, group by group, down the street to the main square, band blaring. Here come the purples, then the reds, then the yellows. The yellows seem to be more interested in the beers in their hands than in anything else, but they were having fun. Lots of kids dressed in the same colors as their parents. Once all the groups gathered in the Plaza Mayor, the announcer came on welcoming everyone to the event. A moment of silence, then a cannon going off, then everyone waved their scarves in the air. The crowd started to break up to find a place to watch the bulls. We followed suit and found a great place in front of the church, just past a turn in the road. 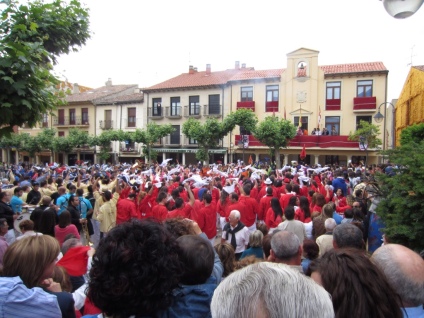 We stood around for about half an hour as more and more people took a place behind the barricades. then each of the brotherhoods paraded by, band in tow. Eventually the road cleared and the police swept the route. Suddenly, a group of young men came running by. Well, the first ones were sort of jogging, but the tail end of the group were sprinting for their lives right ahead of the bull! We screamed as a bull, rounding the corner, almost ran into our part of the barricade as it went after a guy who climbed the fence right in front of us. Six more bulls thundered by and that was it.

But the fun was not over. In the Plaza del Toros (bullring) there was, not a bullfight, but a “skipping” of the bulls. Curious as to what that was, we paid our 10euros and filed into the bullring to find a seat. The brotherhoods were already there. One group played a song, then the announcer introduced the seven toreadors, pros who came from all over the country. After another band played, they spread out into the bullring with one guy in the middle, facing the door where the bull was to enter the ring. He reached his hand to the dirt and crossed himself 5 or 6 times. The bull came out, he dodged it. The bull turned around, the guy ran to his safe barricade next to the wall, and the bull ran after him, but did not stop in time and ran headfirst into the wall and collapsed. The crowd all gasped. Apparently, this was not supposed to happen. Plus, the toreador got hurt somehow as well.

The bullring was silent for a moment, then the announcer came back on and another brotherhood band played as they dragged the bull out by the feet and the toreador was carried out by his compadres. Six toreadors returned to the ring to face another bull (the back up?) This time, things went as planned. The bull ran toward them, they dodged it, arching their back over the bull’s horns as it passed by. Then some toreadors jumped over the bull as it ran toward them, diving, backflips, pole vaulting. Very exciting. Eventually the bull got tired and they let it out of the ring.

Next, they brought a bunch of kids from the crowd into the ring. The toreadors then brought out a bull’s head on a wheel that they could push around like a wheelbarrow. The kids lined up (some looked as little as 2 with parent) and the toreador would push the bull on wheel after them. This was on one hand hilarious and on the other hand a bit disconcerting. I guess that’s the best marketing for future toreadors.

They then brought out another bull, but it was 9:30pm and we were getting tired. We called our taxi and he was there in 15 minutes to take us back to Calzadilla. It’s really great to hang out at the end of the day with pilgrims, but tonight, it really felt like I was part of the village of Sahagun. 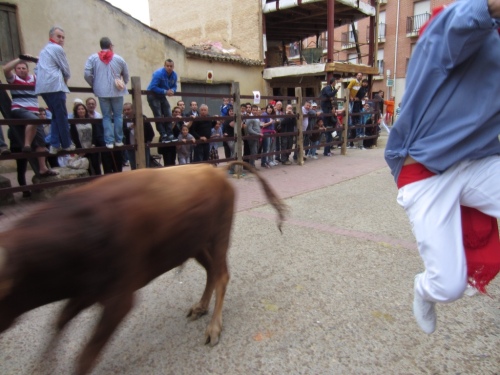 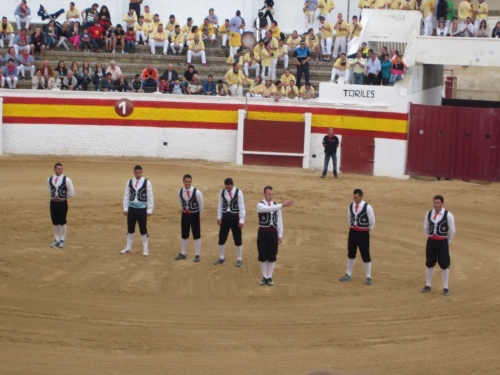 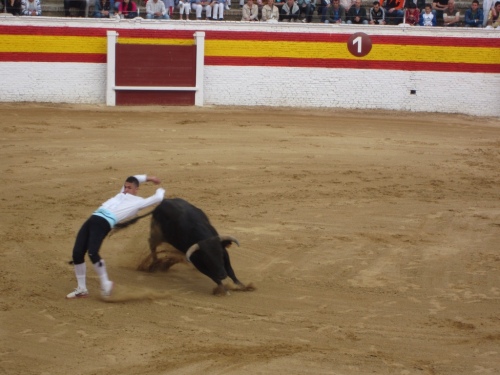