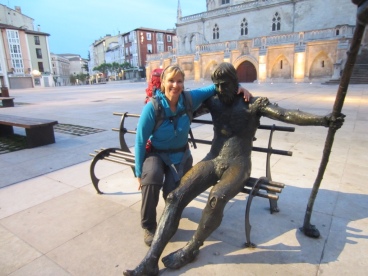 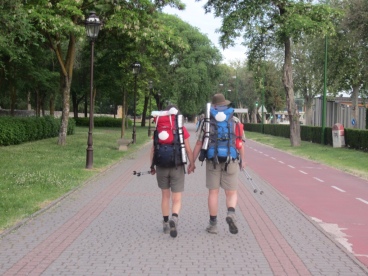 The room wakes up at 5:30am, sleeping in! Uli and I, ready again at the same time, leave our chapel attic after sunrise. We find the yellow arrows directing us to the Way past the Cathedral when I notice that Uli does not have her walking sticks. Yikes! Good thing we are only 5 minutes away. I watch her pack and munch an apple while she runs back through the square to get them. That’s the nice thing about walking with a fellow pilgrim; someone always has your back.

Lots of folks use walking sticks. Susie has some, and she loves them because they have helped her both up and down the hills, some of which have been quite steep. Uli has the same feelings for her sticks as well, feeling that she would not be able to walk as well without them. They look like ski poles, sort of, but with pointy tips. Some, mostly younger folks, like one big wooden walking stick that they swing ahead of them as they walk. For me, I don’t really feel the need for them, I’m walking just fine, maintaining balance on the hills by adjusting my pack straps: loose for uphill, tighter for down. 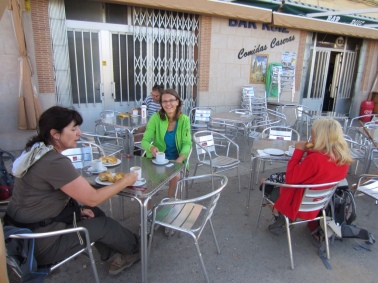 There are some cafes open and it’s tempting to stop for coffee, but it’s more expedient to walk a couple of hours and eat and rest at the same time. There’s a sign outside the town of Tardajos that has a map of the Camino on it and a group of us gather around and take pics of each other. I meet Renate from Holland and Sika from Iceland. We stop at the cafe across the street and have some breakfast at the tables outside. Funny thing about the Camino, even though we spend all day walking outside, we continue to choose to sit outside whenever possible. Inside seems so confining! Plus inside, there is a group of old guys chewing the fat (I don’t think literally) and when I visit the aseos (toilets), there’s a spider in the bowl! I flush first, but find that it’s just a sticker for the guys to aim at, since the bathrooms are unisex.

Sika stays for a cigarette, but Renate walks with us. She and Uli strike up a conversation about Don Quixote (who they pronounce “Donkey Shot” – well, he did ride a donkey) but I am ready for a quiet walk, so I stride ahead. It’s nice, walking through the countryside, and before I know it, two hours has passed and we are in Hornillos del Camino. This is another town where there is just not much going on: a church, a bar, a small shop selling food and pilgrim supplies, and no internet anywhere. It’s only 11:30am and we have walked 21 km. Do I stop here or go on? The next albergue was 5.8km away, but only had 10 beds and no guarantee that they would be available when I got there. After that it was another 5km. Uli and Renate were staying, and I just didn’t have the oomph to go another 10 alone. A couple of nights ago, I pulled a needle and thread through my blisters which had not popped on their own and were therefore quite painful. You leave the thread in the blister – a trick to help them drain slowly. Now they’re drained, but I’ve been keeping them covered and this would be a great opportunity to dry them out. I could also catch up on my writing and just take a short day break. 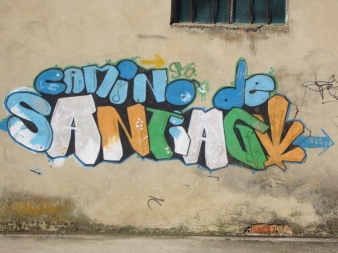 The albergue opened up about 12:30pm and I was the first one in. The bottom bunk! Yay! Since we weren’t really sweaty, Uli and I decided to go down to the little store and buy some cheese to melt on open face tuna/pepper/ham/chorizo sandwiches we planned to make with the albergue’s toaster oven. Time to use that food I’ve been carrying for three days! We have a nice lunch with some cheap local wine and each of us tells a story of why they’re walking. I’ll share some stories in a later blog post. 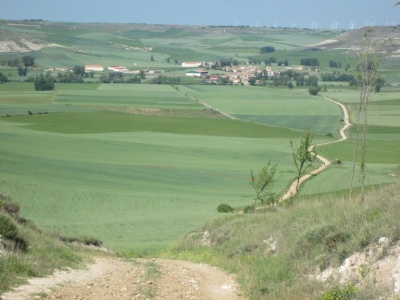 Finally, I have time to write and I hole up in the cool basement and fire up the iPad. Uli calls me for dinner at 6pm and we go to the one bar in town for the pilgrim menu. We share a table in a small, loud room with a French couple who spoke only a little English in a tone so low it was hard to hear. I was tired, ate quickly, went back to the store to get some water, and headed off to bed. 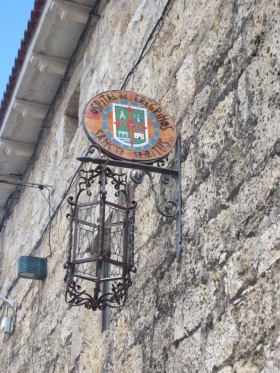 The good thing about the bottom bunk is that if you have to get up in the night, you don’t have to climb the ladder. The bad thing is that the top bunk is often so low that you can’t sit up straight. The really bad thing is when a big guy gets in that top bunk and the mattress sags down even lower because it is only supported by springs and no slats. Good thing I’m tired. 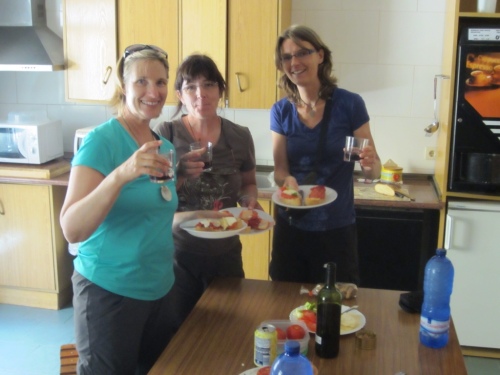 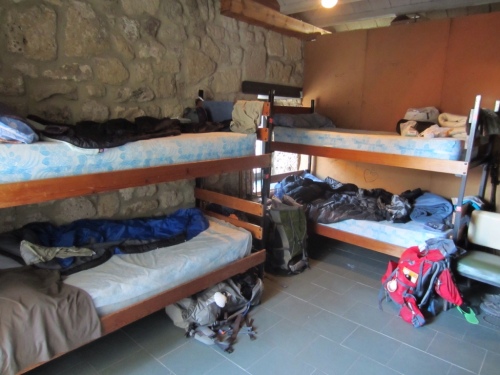 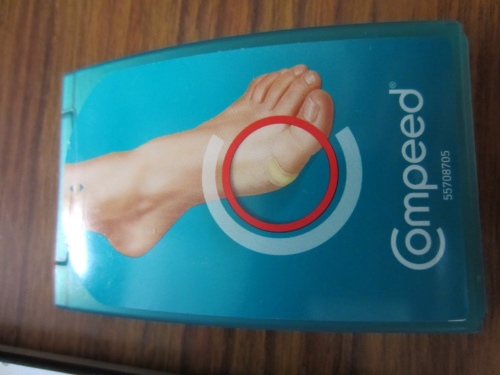