We get up with the French people at 5am. Uli and I are both on the same schedule and walk together out of Redecilla del Camino at 5:45am. I have an apple that I munch on as we go. We are the only ones on the road. It’s about a 2 hour walk to our first breakfast stop past deserted towns and smelly pig farms. We reach the outskirts of Belorado and find a modern albergue right off the road where we have breakfast.

In Belorado, there is a church built into the stone cliffs, but it’s too early, so it’s not open. We have a couple of errands here: get money (not all towns have cash machines), get some lunch supplies, and hit the pharmacy for some more toe tape. The way into town had the best Camino graffiti yet. We find the cash machine and supermercado in the main square. It’s only 9:30am, so the farmacia is not open yet. However, it looks like there’s going to be a big party here tonight. It’s Saturday and vendors are setting up stalls and people are appearing dressed in medieval clothing. There are bales of hay lining what looks like a future parade route. Wish we could stay here tonight, but we have to move on. 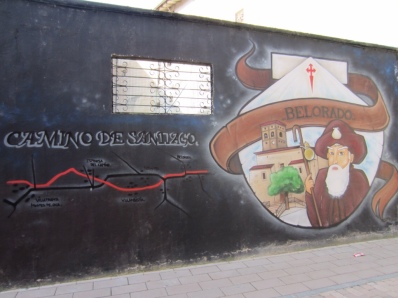 It was as I was leaving town that I received a call from a boy named Morgan that I had met earlier on the Way who was traveling by himself. I gave him my number in case of emergency, and he called me saying that his eye was swollen shut and leaking something yellow. Would I help him? I say goodbye to Uli and turn back into town, instructing him to meet me at the town square. While I waited for him, I found the local albergue and asked the local hospitalero if there was a doctor’s office open. He gave me directions and after I found Morgan, we proceeded to the Centro de Salud (Health Center). 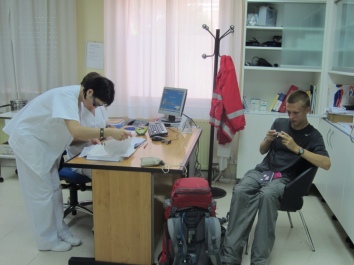 For all practical purposes, they looked closed, but when I rang the bell, a doctor/nurse (not sure which) guy answered and brought us inside. He looked at Morgan, said, “alergias”, and had him show his passport and had me fill out some paperwork as his guardian. They wrote out a prescription for pills and eye drops and would not take a penny in payment for their services. We were out the door in 15 minutes, went to the farmacia across the street, and I got my toe tape and some Compeed in addition to Morgan’s drugs. All of that was about $25.

Morgan saw a friend of his, Jack, sitting in a cafe nearby. Jack had a blister about the size of Colorado on the bottom of his foot and had to stay in town and let his friends carry on without him. “Hey, Morgan!”, he exclaimed, “can’t believe all these things are happening to you, and you’re only 17!” I smiled. “I hope you’re calling your Mom every day!” I just nodded and smiled. As we walked away, I asked him if he was really 17, and he said that it depended on who he talked to. Sometimes he was 19, sometimes he was in college, just depends.

He was hungry, so we went back to the square to have lunch. He went into the bar and came back with a beer and some tapas while I retaped my blistery toes. I grabbed a beer as well and told him my story of how I was traveling with my friends, but they were taking the bus today to Burgos. He told me that he was enjoying the Camino and meeting all sorts of different people. We watched the festival begin, kids wielding wooden swords and girls dressed in garb from the middle ages. Adele’s “Set Fire to the Rain” in Spanish was playing on the loudspeaker. I start to sing along but get a disapproving look from my companion. I saw some dogs on a leash that looked like they had horns, but they were someone’s goats.

As I got up to leave, he decided that he would walk with me. We talked video games, which was fortunate, since I just finished the Zelda game “Ocarina of Time”, even getting all of the heart pieces. In three hours we were at Villafranca Montes de Oca, our destination. We tried to stay in an albergue attached to a 4-star hotel, but they were having a wedding (it’s Saturday) and warned us that the music would be blaring until the wee hours, so we went back down to the municipal albergue and checked in. I saw a bunch of people I had met earlier on the trail, including my friend Uli and the Canadians. Morgan found a bunk near some electrical outlets and dove into his iPad.

Dinner that night was with a congenial group, Uli and I, David from Ireland, Jim the US Spanish professor, a gal from Holland, another gal from Germany, the Canadians, and two lovely Australian ladies, Lynn and her friend (aaarrgh, can’t remember name, sorry!) We enjoyed our chupitos (licor de hierba – grass liqueur) before heading back to the albergue.

Nice to meet such an interesting young man!