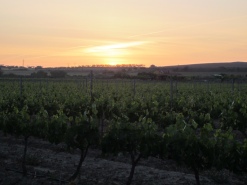 The other day, Uli was telling me about a German TV movie called Die Dienstagsfrauen (The Tuesday Women) about 4 women who met every week to study French. Somehow, they ended up deciding to walk the Camino together. They were quite different from each other and each one had different problems to overcome. To extremely oversimplify the story, after some misunderstandings and mishaps, they made it back home happier, their issues resolved. Their friendships were stronger and they continued to meet every Tuesday.

So it feels today that as we leave Viana as a party of 4, we are The Tuesday Sisters. The church bells rang at 6am and everybody just got up. It took me a little longer this morning since I was trying to figure out how to apply a Compeed to the blistery toes and tape the other ones. (You know, in that Martin Sheen movie The Way nobody had blisters. Here, I haven’t met very many people without blisters, some so bad that they have to stop walking.) I also borrowed some of Uli’s bigger tape to stretch across the back of my heel, as I was starting to feel some pressure there. No redness, though. We catch the sunrise as we walk past the vineyards of the wine region La Rioja. 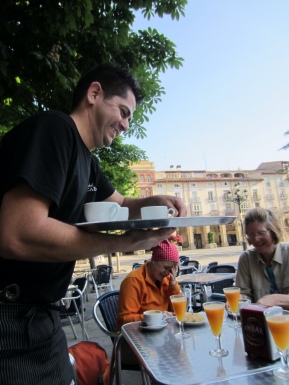 Just outside the town of Logrono, there’s a crude, handwritten sign that says “sellos,” or stamps. Now, I know I showed you the outside of our pilgrim passport, our credential that allows us to stay at these albergues, averaging around 6euros or $8 per night. Each albergue has their own unique stamp that goes into your passport. But it’s not only the albergues that provide a stamp. Some churches, cities, and even stores have their own unique stamps that you can collect in your passport.

So it’s with some surprise that we come up to a little house, right on the road, with a sweet plump Spanish woman inside who has some coffee and cakes and will provide a stamp for any pilgrim that passes by. This is Felisa, who has taken over the job from her late aunt Felisa, the gatekeeper of Logrono. We take off our packs for a moment and file in to get our stamp, but are saving our breakfast hunger for the Logrono Cathedral plaza.

We arrive at the Cathedral de Santa Maria de la Redonda XIV century just as the cafes are opening, around 9am. Packs off, we order fresh squeezed orange juice, cafe con leche, and a small sandwich with scrambled eggs and meat or cheese. Another person has the ubiquitous breakfast food, tortilla, which is not a Mexican flatbread, but a quiche-like omelet of eggs and sliced, cooked potatoes. There are few people in the square since it is relatively early, but then we see some guys on a tandem bike. Then more show up until the square is filled with scores of bicycles, all tandem bikes. The riders get off to take pictures of each other. As a group they are going to Santiago de Compostela. Good for them!

Before we leave town, we make a stop at the pharmacy (farmacia, accent on 2nd a) to get something for Susie’s heat rash. The pharmacist suggests some cortisone cream for a couple of euros, but warns Susie to zip the legs back on to her pants to cover the offended area from the sun. We cross the street to the nice city park and reorganize ourselves for more walking.

As we walk out of town through another lovey park, we see Morgan standing with a tissue up his nose. He’s suffering from a nosebleed, and a Spanish woman walks by to make sure he’s ok. He says it’s just temporary and will be along shortly. Poor guy.

The road out of Logrono leads up to a pretty lake. Since it’s the middle of the week, we see lots of old guys fishing. When we find the cafe with a nice lake view, we find more seniors doing the macarana and serveral other line dances. Susie jumps up to join them as we take our packs off and have a soda and a snack.

We all leave together, but Uli and I are a bit faster than Susie and Mary. We wind up the hill past vineyards and down the hill past a sawmill with lots of little pieces of wood littering the trail. Here, people have taken these strips of bark, as well as other materials, and wove them into crosses between the links of a chain-link fence. Kind of a nice reminder as we look through the fence to the busy highway beyond. At the bottom of the hill, a couple of cute Italian bikers want me to take their picture with the bull sculpture on top of the hill. I then want their friend to take a picture of me with them. Believe me, I am much more happy than I look in that picture, between two cute, young, sweaty Italian guys!

Down the hill, across the highway, and up again (why are these towns always built on hills? can’t we just walk down to a town for once?) we come to Navarette. We see some pilgrims we had met who had stayed in the last couple of towns as we did sitting in front of the bar. They were planning on taking a taxi to the city at the end of the next stage and there were some spots left. Were we interested in sharing the ride? We declined and continued to the albergue.

For dinner, we find a heavy-metal bar (ACDC and Metallica are on the soundtrack) that also has wi-fi and a pilgrim menu available on the back shaded porch. Dinner is salad, chicken cooked in orange juice (just like the gooshy chicken my mom makes), and flan for dessert. Wine and water included for 10euros (about $13) makes it a good deal.

Back to the albergue, I find my top bunk while the rest of the Tuesday Sisters explore the town. However, they’re back before I’ve performed my nightly pre-pack before bed. I’ve also got a new sore spot, a bit of swelling on my knee. Perhaps it just needs some rest… 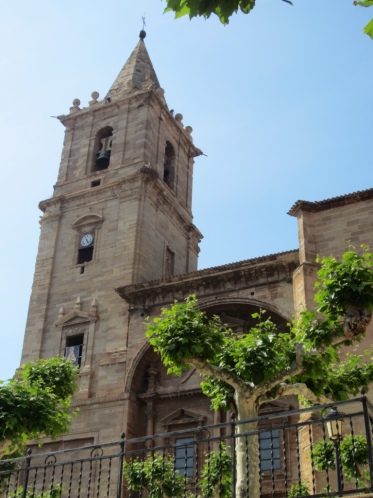 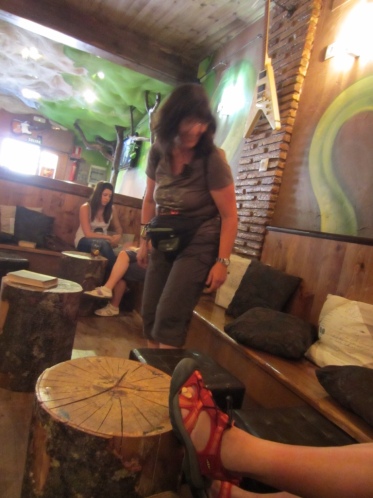